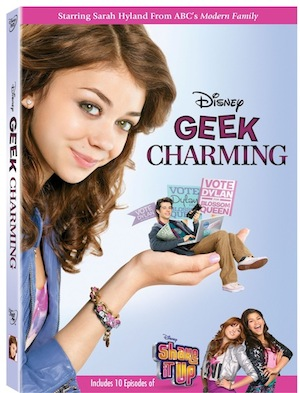 Geek Charming is an original movie from the Disney Channel directed by Jeffrey Hornaday and starring Sarah Hyland, Matt Prokop, Sasha Pieterse and Jordan Nichols. The film is an intriguing  picture with a tone of class, morality and inspiration to a youthful generation.

The film gives insight into teenaged life, but contains a twist on it as the main character Dylan (Hornaday), is setting forth to become popular to honor the legacy of her mother. The film has it’s joy, it’s sorrow and it’s celebrations and is overall a cute flick that can be a great influence on a younger generation. Without giving too much away, I can tell you this is a heartfelt tale of a girl just looking to set forth an example and prove to the world that she can be as good as who bred her.

I was quite surprised by this picture and it has brought to my heart a sense of joy, a sense of need to become an inspiration to my own family and my future children. I was pleasantly surprised that this film could tug on my heart strings as it has and have become a better man by it’s thoughts.

Overall, this film is a good inspirational to people of all ages, but I’d recommend it to teens and younger as this is a good influence to respect your parents and follow in their accomplishments with a hope to make something of yourself. Something of class and style.