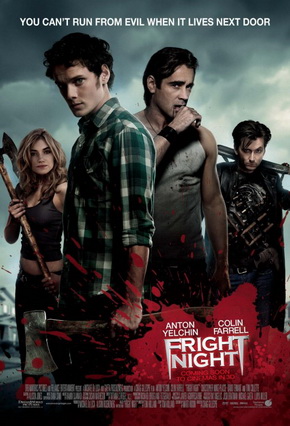 I heard rumors about the remake of the Fright Night movie. Some people said, “It was just like the old movie and it wasn’t good.”  So, I went out and bought the movie to see for myself.  I know some of you are not going to agree with me, but to me I like the new version better than the old version. The two movies have the same story plot, the same character’s names, and the vampires still had the big odd mouth shape when they are feeding.  If you watch the two movies side by side you can see the difference.  The old version of Fright Night was kinda cheesy in the making and the new version had an updated feel to it.  I think Colin Farrell (Jerry) played a very sexy vampire and David Tennant played an awesome Peter Vincent.   If you don’t agree with me, just watch the two movies together and you will see the difference.

Fright Night is now out in stores on DVD and on Blu-Ray.