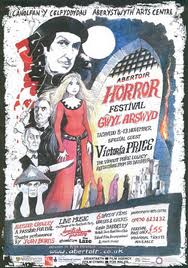 After weeks of anticipation Abertoir finally arrived with an intriguing first night of horror. Kicking off the festival was the ‘House of Long Shadows’ starring Vincent Price in what was to be the first of many films throughout the convention that paid tribute to such an iconic actor. After setting the mood for the evening, the film was followed by a censorship talk which was to become the main focus for the evening.

Then came the film that everyone was both anticipating yet dreading, and that was the ‘Human Centipede Part 2 (Full Sequence)’. Now my initial thoughts were that this was going to be a disgusting film without any meaningful commentary based on previous trailers, and in fact I was quite (not pleasantly) surprised. Though receiving extremely divided reactions where some deemed it to be pointless and despicable, which may have in fact been an intention of Tom Six who directed this film, it arguably can be seen as an attack against film regulators and censorship, whereby the film conveys a worse case scenario and elaborates on it to emphasise the ridiculous nature of measuring a film’s influence on one’s actions.

The film basically presents a socially reclusive man named Martin who throughout the films fantasises over the first film in a self referential plot. Throughout the film the acting from Lawrence R. Harvey who plays as Martin is probably the most appealing, if unnerving aspect of the film, since he portrays a twisted character that relies on body language rather than dialogue. His desire is to recreate the centipede but on a larger scale, which for him that involves a do it yourself approach lacking in any sense of medical knowledge. As he hunts his victims, he simultaneously deals with an overbearing mother who despises him, as well as a predatory doctor who wishes to have Martin for his own sexual desires. Now these sub plots may seem a bit silly but in a sense this is the point as the film does a surprising job at delivering extremely dark humour. 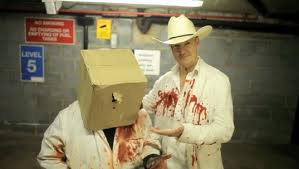 However, this is not to say that you root for the character as he attempts to fulfill his ideas, as when he does carry it out in a particularly gruesome sequence (stretching to nearly 20 minutes) it grants audience’s what was promised in the first film, that is explicit content meant to disgust and shock. It is this concept that for me that seemed to detract viewers from seeing it as a proper satire, since the overall violent content overshadowed any meaningful message. Apart from a complicated representational basis there are still problems with it as a film. One is the pacing, which does not pick up from the first and therefore drags at an extremely slow rate to the point where repeated actions seem to blur and you cannot figure out where the story is going next. Additionally there are some parts where the film does go to unnecessary levels, and one such area is when Martin captures a pregnant woman, which then leads to an escape near the end that results in a horrible scene involving a newborn baby that i won’t explain here.

This was a difficult film to take in, and its a shame since despite the film’s potentially critical and effective message, it is still burdened with content that removes any form of credibility.

What was most surprising after the film was the actor who played as martin himself, mainly because he was obviously a lot more saner than the character onscreen. He came across to be an intelligent, friendly and comical man who gave some interesting perspectives on the film itself. One was that of the mental state of Martin, who he described as not being mentally incapable, as throughout the film he does some careful planning, but he is seen more as socially and psychological incompetent. As well as this he described the film’s intention of being a satire and delved into how the concept of the film was to attack the way in which people decide for others what to watch. 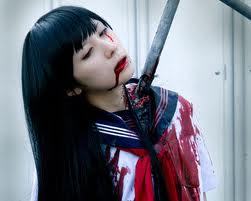 This was to be the least favourite of the moviegoers at the festival (it came last in the poll for best film) yet I still found it to be an intriguing, elaborate if rather confusing. The film centres around Tsukiko, who has witnessed the death of her sister Tomie. Now from here the plot spirals into madness as Tomie returns from the dead several times. By the the end we realise that it is some sort of curse where Tomie’s attraction causes people to murder her out of passion. Tsukiko’s role in this is to accept that in fact Tomie is in fact a part of her, as well as everything she hates about herself. Therefore by the conclusion she submits herself to the curse. Now this was not apparent to me at first and I had to read up on it afterwards, which highlights on of the flaws where a casual viewer might find it difficult to catch without hearing about the source material its based on (a manga series). Apart from the plot the film was filled to the brim with bizarre yet scary practical effects that evokes a strong sense of body horror (including one extremely fast incarnation that will freak out any audience member). However since the film is so intentionally elaborate, it makes the film more forgivable and quite comical too.

With this being the last film for the evening,the night proved to be a taste of what was to come next.