You have to have a thick skin if you want to be an actor, confesses “Devil’s Cove” star Chloe Traicos. As the Zimbabwe-born thespian reveals in this exclusive interview, she works in the “toughest industry in the world” and – to quote Rocky Balboa – it can beat you to your knees and leave you there, if you can’t stay strong and focused. In the movie “Devil’s Cove,” which opening this August in theaters, Chloe Traicos plays a woman who, alongside her female partner, hit the road after a murder.

Meagan Meehan (MM) of Movie Vine: What inspired you to become an actress?

Chloe Tracicos (CT): I don’t think there was ever anything specific that inspired me. Acting is something I’ve done for as long as I can remember. There was never any other option for me. I wasn’t someone who saw a movie and was inspired by a performance, I just knew from the earliest age it was what I wanted.

CT: I had some formal training in South Africa and Australia.

MM: What was your big break in acting?

CT: I don’t think there was one…At least not yet. You just do project after project and you keep doing it because you love it.

MM: Did you frame that first check?

MM: Wow! We’ve asked this question to several interviewees and I think you might be the first to actually confess to doing that!

CT: It wasn’t much money but it was my first check from the box office. The theatre actually called me some weeks later to inquire as to why I hadn’t cashed it yet.

MM: How did you get involved in “Devil’s Cove”? 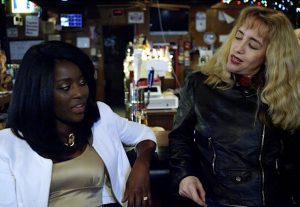 CT: I wrote the script. It was an idea I’d been playing with for some time and then I met Erik (Lundmark, the director) when he directed me in a music video and I thought he’d be great as a director.

MM: Does it go without saying that you’re a fan of thrillers and dramas?

MM: Can you talk a bit more about working with Eric?

CT: Erik is great. He loved the script when I showed it to him and just totally “got” it. We bounced ideas off each other for a while.  This was his first feature film and I think he’s done a fantastic job. He won a Global Accolade and the Indiefest Award for Best Director.

MM: Thus far, what has been the best part of working in the industry?

CT: The best part is watching the words you’ve written be acted out. It’s so surreal turning up on set and there everyone is setting up everything as you wrote it in the script. It’s amazing and such a beautiful feeling.

CT: I have several at the moment. The main one is a romantic comedy called “Introducing Jodea” that I’m doing with Judd Nelson. We are planning on shooting it later this year.

CT: Only do it if you absolutely want to and be thick skinned about it. This is the toughest industry in the world and you can’t stay in it if you’re going to fall to pieces every time you don’t get a role. But if you want it bad enough you keep going no matter what.

To learn more, check out Chloe’s Facebook and IMBD here and here.