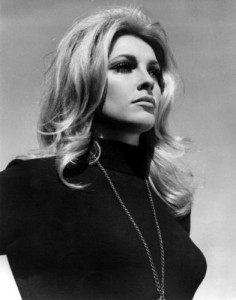 Sharon Tate is one of my favorite actresses from the 1960’s and I have seen all of her movies.   I think some people don’t know about her life and film history that much.  They just know her name from her famous death in 1969.

But did you know that she was born Janurary 24, 1943, in Dallas Texas to an military family who moved from city to city, then over to Europe.  She was the oldest of three girls and was the homecoming queen in high school.  After high school she began her film career in Italy, where she was an extra in some films.  Then she decided to move to Hollywood California where she got the part in The Beverly Hillbillies as Mr. Drysdale’s a secretary (Janet Trego), from 1963-1965. ( she wears a black wig in the show.)

Sharon’s career took off when she did the 1966 horror film called the Eye of the Devil and the other movies that followed were in 1967 The Valley of the Dolls ( Jennifer),  1967 The Fearless Vampire Killer (Sara), 1968 Rosemary’s Baby (which she had a small part in the movie), 1968 Don’t make Waves (Malibu) the fun fact about this movie is that the Malibu Barbie is taken from her character and in 1968 The Wrecking Crew would be her last movie that she did before her death.  And you can still see her in these movies on DVD at Amazon.com

Her sister Debra has a tribute website that you can visit  http://www.sharontate.net/