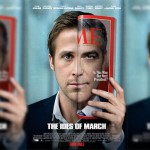 The Ides of March is a political dram film starring George Clooney as a Democratic presidential candidate who’s run for President of the United States may be thrown off by the actions of his press secretary portrayed by Ryan Gosling. The film is due for release on October 14th, 2011.