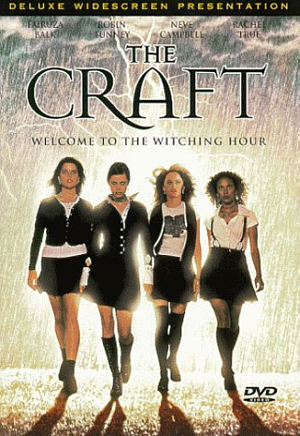 Although The Craft movie is from 1996, it is the best movie that I still enjoy watching.  A teenage girl, named Sara (Robin Tunney), moves with her father and stepmother from San Francisco to Los Angeles.  She is the new girl at a catholic school where she become friends with three girls named Nancy (Fairuza Balk), Bonnie (Neve Campbell) and Rochelle (Rachel True), who are the outcasts by their fellow peers.

Sara finds out that Nancy, Bonnie, and Rochelle are practicing witchcraft and that they are looking for a forth person to complete their circle of the four elements. The four teenage girls dabble in a spell that invokes a powerful deity, which they use to get revenge from the people that hurt them. Sara puts a spell on a boy who told rumors that he slept with her. Bonnie wants her scars gone so she can become beautiful. Rochelle gets revenge from a female bully. And Nancy gets her wish to have great powers from the powerful deity.

Sara soon sees that the spells granted to them are more like a curse rather than a blessing. Sara’s spell becomes a nightmare when the boy she put the spell on starts to stalk her and almost rapes her. Rochelle starts feeling sorry for her bully who is losing her hair. Bonnie is getting greedy from being beautiful. And Nancy is becoming out of control by thinking she is invincible. Sara gets out of the circle and the three girls put a nightmare spell on her so she’ll come back to them. Sara defeats Nancy and the spell is broken. For Sara, Bonnie, and Rochelle, their old lives come back to them. What happens to Nancy? Well, at the end of the movie it shows that she ends up in a psychiatric hospital.