So here’s the obligatory opening paragraph when it comes to long running franchises that explains my point of view about said franchise: I like Star Trek. I enjoy the original series, and I really enjoy the first few movies. I’m familiar with the ensuing series such as Next Generation and Voyager, but I’m not as well versed in them as I am with the original crew.  And I absolutely love 2009’s Trek. It was my favorite film of that year.

With all that in mind, let’s get on to my review of Star Trek Into Darkness, which might be the most frustrating blockbuster I’ve seen in a long time.

The direction of this picture is flawless. Abrams knows how to craft amazing sequences that work visually and emotionally. None of the problems with Darkness come from him. All the problems come from the script.

And my god, what an awful script this is. This group effort by Damon Lindelof (Prometheus and Cowboys and Aliens) and the duo Robert Orci and Alex Kurtzman (the Transformers films) is atrocious. It blunders along with no rhyme or reason, wrapping the Enterprise crew up in a conspiracy plot consisting of clumsy 9/11 and Iraq War allegories. Plot holes abound, character motivations are constantly questioned, and new tech sprouts up that borders on the fantastic. This feels more like a Star Wars film than a Star Trek film. While the first film focused on the teamwork aboard the Enterprise, this film is only concerned with the relationship between Kirk and Spock and how the villain and his own crew mirror that relationship.

That villain is Khan, by the way. I suppose I should put a spoiler warning on the head of this review, but to be honest I’m really tired of the spoiler-phobic culture. The villain is Khan, but barely Khan. This isn’t the proud, preening, ethnic warrior from Space Seed and Wrath of Khan, but rather a white guy we’ve seen give much better performances elsewhere. Benedict Cumberbatch is spectacular in BBC’s Sherlock, but you wouldn’t think that given his performance here. In Darkness, all he gets to do is stare harshly while spouting dialogue that would make even a C-Grade Bond villain cringe. Just as the script failed Abrams, it has failed Cumberbatch and any fans of the character.

Let’s face it: these guys are not fans of Trek. They’re just hired guns doing their best to ape any movie that’s made a billion dollars in the last few years. Big explosions? Check. Awkward expository dialogue? Check. Villain captured halfway through, only to be revealed as part of his plan? Check. This is a film without a brain, a Trek film for people who probably hate Star Trek.  This is a movie where the day is saved when our main character just kicks the fucking shit out of a machine really, really hard. This is a movie where the female characters are defined only by their relationships with men. The headstrong, confident, mature Uhura is gone, replaced by a woman constantly and literally shoved aside by her own boyfriend in favor of his bro. And don’t get me started on the utter waste Carol Marcus is here. She’s one of two characters that start out under a fake name and reveal their true names later on in a fumbled fan service effort.

The other character introduced under false pretenses is Khan himself, but the reveal is pointless. This is the one aspect where Abrams went too far with his Mystery Box fetish, and the decision to keep the film’s antagonist a mystery is a huge mistake. Imagine watching a Batman film where the bad guy claims to be just a dude named John Harrison for the first half and then reveals himself to be the Joker (even though he looks nothing like the Joker we all know). And imagine the studio deciding to not market the movie as a Batman/Joker story. If you’re going to do something big and not tell your audience your doing it, then what on earth is the point? Why not create an original villain?

Ok, reading that all back I sound incredibly negative, but I’ll be honest: in the moment, Star Trek Into Darkness is a blast. The music, the cinematography, the effects, the direction, the action, all of it deserves a better script than this, and it all works overtime to make you not pull at the strings and undo the tapestry. I cannot stress this enough: this movie is incredibly dumb, but it is also incredibly fun. It may not be a great movie, but it sure is a great time. The question is, is that enough? 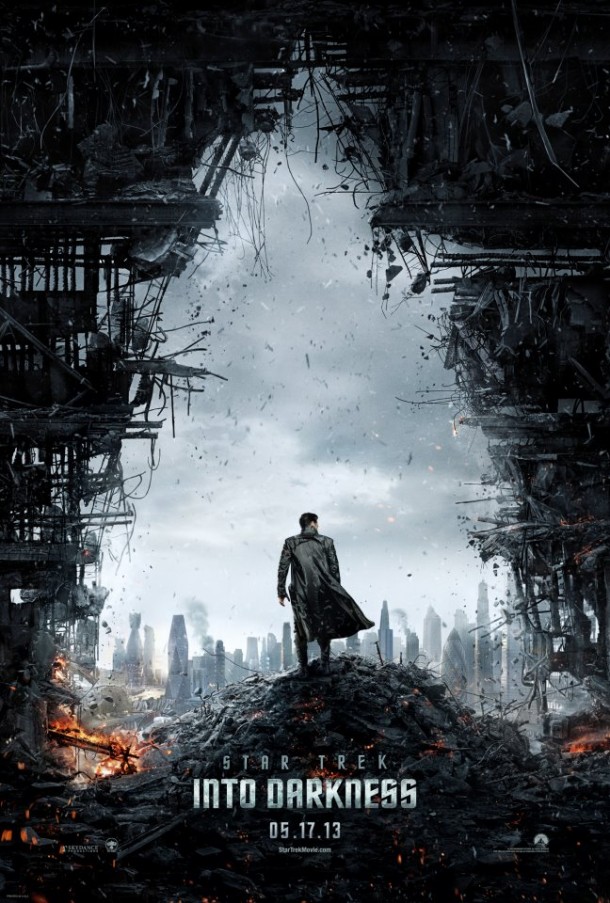 Star Trek Into Darkness is now playing in theaters everywhere.