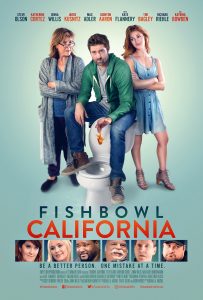 The poster and trailer for the independent comedy film titled “Fishbowl California” has just been released. The film is now available for pre-order through iTunes just prior to its digital release on all major VOD platforms on May 1, 2018.

Here is the synopsis for “Fishbowl California”:

“A man struggling to find purpose in life (Olson) becomes enlightened by an ailing drunk widow (Cortez).” Reviewing the movie, Jeff York of The Chicago Independent Film Critics Circle wrote, “Fishbowl California is both a LOL comedy and a moving character study. It couldn’t be savvier in its study of the eccentrics who inhabit Los Angeles, or the universal vulnerabilities of the human condition,” and “Katherine Cortez and Steve Olson give the kind of performances the Independent Spirits were made for.” Jim Alexander of The Chicago Independent Film Critics Circle wrote, “A film with a perfect blend of creative, smart, touching and hilarious.”

Check out the trailer below…