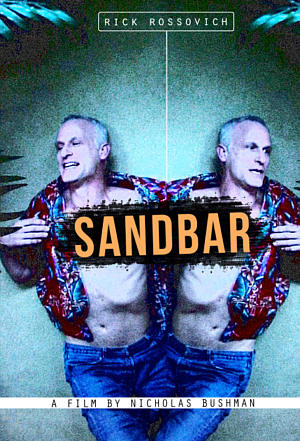 Rick Rossovich – known for his roles in Steve Martin’s “Roxanne”, the Beefcake who taunts the “Terminator” before being thrown through a wall and who is best recognized and most admired as Slider, Iceman’s wing man in “Top Gun”. The military man, the cop, the Flex on the Volleyball Court with Kilmer – that’s Rick Rossovich. Why would Rick Rossovich, who decidedly left Hollywood a decade ago, living in peaceful obscurity with his wife, Eva, and their two children, in Eva’s homeland in Sweden, why would he leave home and travel so many miles to Ohio to play ex-Marine Ronnie McCubbing in “Sandbar”? The answer to that question is a great story.

· Retrospective about Rick Rossovich/ Interesting Back Story. There’s a really cool story here about what Rossovich has been doing since he turned in his badge in the late 90’s and made the move to Sweden full time. It was lucky timing, pure chance, that Rossovich ended up getting the “Sandbar” script which was sent to his old address in California. And reading it on the flight back to Stockholm, the damaged lead character was captured in a way that resonated with him deeply.

· Cultural, Timely Relevance – What’s happening to our war families? It’s Today’s America: Is Ronnie McCubbing that guy from Navy Seals who carries Charlie Sheen and a giant gun, running with Michael Biehn to the beach, is this that guy fifteen years later? Is this what happened to Slider after one too many wars and battles? A homeless ex-hero who moves into his mother’s house when his wife kicks his ass out for drugs. Disconnected from his only son. Splintered lives. Downward spirals. Violence. Instability. Collisions.

· There’s a New Generation of Filmmakers at Work. This is a Bona Fide independent film made on a shoestring budget of $50,000 – exactly as the young filmmakers envisioned it, stark yet rich with dynamic relationships. Once writer/director Nicholas Bushman connected with Rossovich, he traveled to Sweden to seal the deal and filming began a month later. The five-years-in-the-making Sandbar is visually, structurally inspired and thematically unique.

In the gritty independent film, Rossovich stars as an out-of-control ex-Marine who spends one crazy day with his estranged son with both hilarious and heart-breaking results. Or “A white trash ‘Bicycle Thief’,” as first-time writer/director Nicholas Bushman more succinctly puts it, citing Vittorio De Sica’s neo-realist classic as one of the film’s influences, which diversely ranges from the pioneering work of indie godfather John Cassavetes to the Tom Cruise fluff classic “Cocktail”.

This all adds up to a bold new film that sees the veteran actor inhale nitrous oxide out of beach toys, sing Karaoke, and kill squirrels as Ronnie McCubbing, a role that many are already calling the best work of his career. “People really aren’t going to believe what Rick does in this movie,” says co-star and producer Mike Dwyer, who has been making films with Bushman since the two were both in middle school together. “It’s not his swan song, it’s his second coming.”

After rising to fame in such 1980’s touchstones as “Top Gun”,“Terminator”, and the Steve Martin comedy “Roxanne”, Rossovich turned in his badge in the late 90’s. Stints on “ER” and the kitschy “Baywatch-on-bikes” series “Pacific Blue” left him disillusioned with the business. By the end of the 20th century Rick was ready to retire from Hollywood, focus on his young family, and spend more time in wife, Eva’s, native Sweden. That’s where he had been living when a young filmmaker came calling in 2010.

With their careers seemingly headed in opposite directions, Rossovich and Bushman hooked up by sheer chance. Rossovich happened to be “back in L.A. for a few days to do a little more clean-up work on the move, and there at my real estate agent’s house was this script,” he explains. “My agent was resigned to the fact that I wouldn’t take any more work, so they never sent me anything…” As it turns out, Bushman had blindly sent Rossovich his “Sandbar” script with an impassioned cover letter, coincidentally the very same week that Rossovich was back in town. Despite his self-imposed retirement, Rossovich read it and was immediately “hooked” by the deeply personal story and rich characters. “Nobody had ever offered me something like this, or had the trust in me to think I could pull it off,” he continues.

Rossovich still needed some convincing to step back into the ring, which ultimately led to the then-25 year old filmmaker taking an impromptu trip to Sweden to seal the deal. At Rick and Eva’s home in Stockholm – a work-in-progress loft, art studio, and current renovation of a 1920’s grocery store – Rossovich and Bushman spent several days discussing the script and sharing stories. “I had never been out of the country before,” laughs Bushman. “And I spent the whole trip holed up in Rick’s house rehearsing with him and listening to these amazing stories. It was perfect.” During this short trip, Bushman and Rossovich forged a bond of mutual respect when it came to their work that has developed into a lasting relationship. A grueling 30-day shoot in the bone-chilling heart of an Ohio winter was soon underway.

Rossovich was thrilled to breathe fresh, creative air again, writing in his production journal during the shoot: “It’s amazing to be back in a controlled environment and be able to be completely out-of-control”.

Recalls Dwyer: “It was clear from Day One that Rick’s batteries had fully recharged. But just how much he brought and gave of himself everyday I think surprised everybody.”

Rossovich embraced the guerilla-filmmaking approach, which not only suited the essence of the story, but offered him the creative freedom that had been sorely lacking in Hollywood, adding in his journal,“It feels like the New Wave has hit Ohio and this little team who speak a different language are making a film that hasn’t been made in a generation. That’s because they are the New Generation… It feels good to be young again.”

With a shoe-string budget of $50,000 (or “A really nice Mazda”, as Dwyer calls it), Bushman crafted his script around accessible locations, including his own great-grandmother’s house. “It’s just the idea of using your disadvantages to your advantage,” he explains of the surreal time capsule of a location. “And I liked the idea of Slider (Rick’s character from “Top Gun”) doing fake cocaine and shooting guns in my great-grandmother’s house.”

Talented newcomer Katie Keene beat out a number of more established actresses for her scene-stealing turn as Rossovich’s much-younger girlfriend. The star-in-waiting still seems to be coming down from the whole experience. “Every day was like a crazy new adventure,” the Kentucky-native fondly reflects. The production took her and the rest of the tough-as-nails team across the state of Ohio to capture the film’s darkly comic story. That story encompasses, among other things, dead friends, dead squirrels, dead-eyed teenage thugs, and an unexpected and unforgettable game of Laser Tag that plays like a deleted scene from the original “Tron” (had “Tron” been directed by Lars Von Trier).

“There are some amazing, surreal elements to the film,” says Dwyer,“but that’s all grounded in a very simple, human story. It’s chipping away the emotional truths between a father and a son.”

The small but dedicated cast and crew was assembled from across the country and, in Rossovich’s case, the world, to take part in the wild “Sandbar” journey. As film productions go, it was truly one-of-a-kind.

“Rick told me to live up the experience,” adds Keene,“because this was not what most Hollywood movies were like.”

And from the first frame, you can tell that “Sandbar” is anything but your typical Hollywood movie. To achieve the film’s unique look, the team “tricked-out” retro European digital cameras, to give it “a throwback vibe to the grittier feel of the film’s of the 70s,” says Bushman, who was tired of the same “clean to the point of sterile” look of many recent independent films. “We wanted it dirty,” he proudly proclaims.

If Rossovich’s McCubbing in “Sandbar” has just returned from a war, the makers of it seem ready to start one. “A lot of independent films have become just as clichéd as big-budget Hollywood movies, just in their own way,” Bushman says. “Our hope with this was to do something a little different than what everybody else is doing. Ideally, ‘Sandbar’ is like a lost movie from the 70s, only set in the world right now.”

Is the damaged ex-hero of “Sandbar” that same guy from “Navy Seals”, who carries Charlie Sheen and a giant gun to the beach, fifteen years later? For Rossovich, the film is “simple in its scope, but epic in its themes,” adding,“Thematically I think it’s right on time. The sense of loss and desperation comes straight through without hitting you on the head and somehow takes you where you least expect.”

The one-of-a-kind film is currently in the final stages of post-production but it’s ultimate path to audiences in the ever-changing climate of independent film remains to be seen. “The issue is always going to be how to gain attention for a smaller film like this when you’re up against 10 million dollar ‘independent’ films with big movie stars,” admits Dwyer. “But we’re ready for a fight.”

Rossovich, for one, who was thrilled with an early cut of the film, is ready to fight with them. Whether “Sandbar” will be Rossovich’s final curtain call as he had initially intended or indeed turns out to be his “Second Coming”, is the big question. But everybody involved is confident in the prospects of this “little, big film” as Rossovich calls it. “Good is good,” says Dwyer,“and that always trumps the other stuff that comes with making a film. Audiences want something new and different, I believe that.” Bushman agrees, adding “We keep joking that the tagline for the movie should be ‘Sandbar: NOT IN 3-D’…Half-joking.”