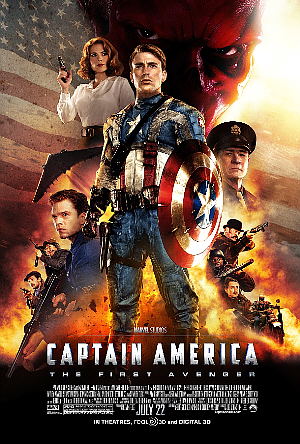 The plot takes the audience on an adventure through Steven Rogers (Chris Evans) life. From his days as a weak individual in the 1940s to his genetically improved and heroic form as the First Avenger, the plot sets us on a ride to witness Steve become Captain America and fight to bring down Red Skull (Hugo Weaving).

The visual effects were phenomenal. There were clearly scenes of which were meant to be in 3D, but it didn’t at all hurt the viewing experience to have witnessed them in 2D. Explosions, gun fire and basic stunts were all top notch with the aid of animators and special effects artists.

The music featured a patriotic feeling and graced the stereo of the theater with thumping and roaring sound. It brought forth great inspirational sounds and helped get me into the feel of the film.

The cast performed their roles to the utmost of quality, especially Chris Evans in the lead role and having been a fan of his for many years, I can say how proud I am to have had faith in his casting and hope this film brings him more jobs and more fans. Tommy Lee Jones and Hugo Weaving were also great in their roles and left a feeling of influence upon me.

The film never shed a bit of dullness in its execution and I can only say that I wish it had been longer. I eagerly await any continuation of the character’s story, especially that of The Avengers coming May 4, 2012.

The film was an inspirational comic film that gave me the feeling of wanting to join the United States Army even more and inspired many fans in the audience to cheer and laugh, especially the post-credits footage, which gained ovations and joy. The only flaw in the entire film experience was that of people goofing around by making hand figures during the credits.

Even Captain America “himself” was in the audience, as a fan decided to dress up as the hero in full costume, including helmet, suit and shield. The film’s final line left a cold, chilling feeling in me and I eagerly await the possibility of a follow-up. The film is one of the best of 2011 at least and I recommend it. Keep your seats through the credits for an added bonus.