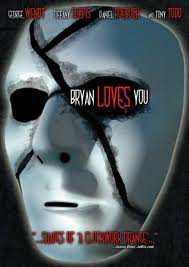 If you are into horror films, you’ll be able to watch Bryan Loves You on Hulu for Halloween. The story is set in the early 90s. A 32-year-old psychotherapist (writer/producer/director Seth Landau) began to suspect that his small Arizona community was being taken over by a homicidal religious cult known as ‘The Bryans’. His entire ordeal was captured on camcorder footage and security tapes. They are the video musings of a highly disturbed young man. Starring: Seth Landau, Tiffany Shepis, Lloyd Kaufman, Candy Stanton, Tony Todd, Tom Noga, Tori King, Jacqui Allen and written and directed by Seth Landau.

Anchor Bay Entertainment’s BRYAN LOVES YOU is now available at popular TV/movie broadcaster Hulu.com . The movie premiered this week at the site in honor of Halloween 2011. Watch it here. In addition, the film will be sold internationally at this fall’s AFM in Santa Monica, CA by Meridien Films. (Win a “head covering” of the Bryans for Halloween here.)

Here is the trailer: