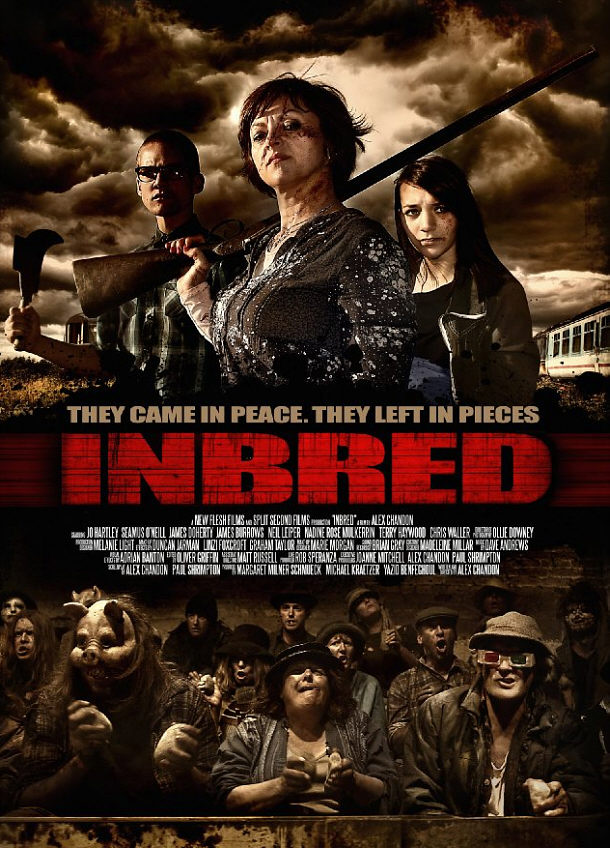 Yorkshire-set “Inbred” (2011) directed by Alex Chandon has something for everyone. The cast and crew involved with the production have created a film Britain can be proud of and has definitely put British Horror back at the top in league with classics such as “Peeping Tom” (1960).

The plot focuses on four young offenders along with their care workers while on a group outing in the quiet farming area of Mortlake partaking in some good honest community service; however soon events turn deadly as the group of deviants stumble upon the bizarre and twisted traditions of the locals and soon find themselves in a heart stopping fight for survival.

“Inbred” really worked as a suspenseful, scary, disturbing, yet a comedic and dramatic horror movie. References to several British masterpieces before it were in place such as “A Clockwork Orange” (1971), ,“The Wicker Man” (1973), “An American Werewolf in London” (1981), and notably a more recent addition to the genre “Mum & Dad” (2008) alongside well known American horror films including “Deliverance” (1972), Wes Craven’s “The Hills Have Eyes” (1977) and “Children of the Corn” (1984) all acting as a clever homage showing that the film was made just for us bloodthirsty horror fans!

Several issues within society were incorporated into the narrative; ideas of family and the patriarchal figure seen in both the Inbreds and in the group; the close-knit community, the fear of the outsider, deviant and anti-social behaviour, racism and the decline of the British Entertainment Industry. There was also a nice little comment thrown in there on the overuse of 3D when it comes to a lot of modern horror films.

What “Inbred” has that many films of the genre seem to lack is a strong sense of empathy for the protagonists. This was due to the exceptional performances from the entire cast. It was refreshing to see such strong, well-written characters in a genre that has endured negative criticism for years.

Let’s hope “Inbred” achieves the mainstream cinema and DVD releases that it deserves; as it has proved to be a crowd pleaser at several horror festivals around the world.