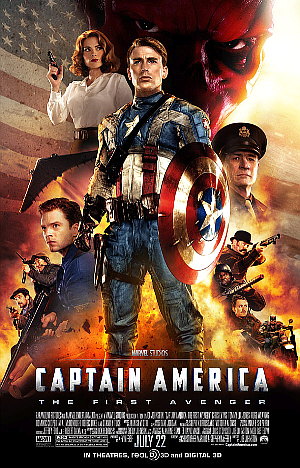 HitFix has a new poster for Captain America: The First Avenger, and it is gorgeous. Marvel and Paramount are really embracing the film’s period setting, and early word is the film is the best Marvel feature yet. Of course, I expect nothing less from the director of The Rocketeer.

After Iron Man, The Incredible Hulk, and Thor, Captain America is the final standalone film before the big Avengers team up next summer. I mentioned in my Harry Potter review how great it’s been to live through Lord of the Rings and the emergence of fantasy cinema, and I can say the same for comic book film. The Avengers is a team up film never attempted before in ANY genre, let alone superheroes, and Marvel is so close to pulling it off. Let’s hope they don’t fumble the ball.