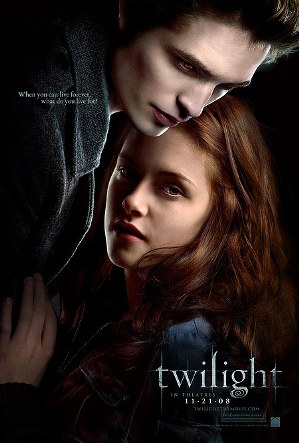 I’m a sucker when it comes to vampire movies, but…

…My question is when did bad acting become a prerequisite for depicting innocence and lust? Bella Swan’s (Kristen Stewart) blood scent isn’t the only thing arousing hostility from Hollywood’s newest translucent teenage heartthrob vampire Edward Cullen (Robert Pattinson) and the other undead…and the viewers. The stench of her inability to project a single convincing emotion permeates the entire film, casting enough of a fog that no immortal need ever worry about UV rays. You can almost hear the director coaching her from behind the camera for the over-affected lip quivers and shaky gasps. Throughout the entire film, she does not render a single convincing emotion, even when she’s trying (too hard, in most cases). Unfortunately, now that she’s “on the grid”, Hollywood’s nepotistic tendencies will undoubtedly yield her another shot, most likely in a sequel entitled something trite like “Dawn”. Better get some more acting classes under your skirt before the next shoot begins, Kristen.

Pattinson’s depiction of the 90 year-long high school junior also left much to be desired, in that much like Stewart he was obviously chosen from a stack of pretty headshots rather than talent resumes and actual auditions. Yes, he has the gaunt lithe pale androgynous pretty boy look that teeny-bopper girls the world over are so wont to desire these days, and his glaring gaze can most likely knock the bobby socks off most any love-starved high school girl lass, but where’s the substance? Perhaps the casting couch of some industry Cougar needed warming.

According to novelist Stephenie Meyer and screenwriter Melissa Rosenberg, the superhuman Cullen Family played baseball in a thunderstorm because the crack of their bats blended in with the thunderclaps: “I see now why you need the thunder,” pants Bella after the first swing. This does beg the question, however, that if a human can break a bat when swinging away, what’s to stop a vampire from doing the same, or even knocking the skin off the ball? This and other holes in the story such as walking in the sunlight (the top of the mountain scene) and quartering & burning as the only means to dispatch nosferatu leave you wanting when all is said and done. Whatever happened to the ol’ tried-and-true stake through the heart gambit?

In defense, Washington state’s local boy Billy Burke’s down-to-earth portrayal of Charlie Swan, Bella’s introverted protective father is the only saving grace to this otherwise deplorable attempt at creating a world to which we can escape for two hours and fifteen minutes. Kudos, Billy.

Twilight’s location choice and cinematography are quite beautiful with Washington’s verdant rainforests, mountains, lakes, waterfalls, and Pacific coastline combining to provide a beautiful backdrop with a lush, cozy, wintry feel that makes you long for a cup of cider and a lovers cuddle in front of a fireplace. Adding to the atmosphere is Carter Burwell’s dreamy music score, accented wonderfully by warm piano pieces one can easily get lost in.

By the way: is it just me, or did the evil vampire James(Cam Gigandet) look suspiciously like Brad Pitt’s Luis de Pointe du Lac in Anne Rice’s ‘Interview With the Vampire’? For a moment I forgot which vampire movie I was watching…I kept waiting for Tom Cruise’s cameo.

Obviously I don’t get out much…when did going to the movies get so expensive? $9.75?! I could’ve BOUGHT TWO used DVD’s of B-movies that I could watch over & over! I want my money back.

This film BIT. No pun intended.
2 OUT OF 5 STARS