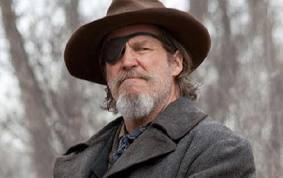 True Grit proves that the Coen Brothers can not only adapt a beloved novel (see No Country for Old Men, Best Picture 2007), but can remake an Oscar-winning beloved film. Joel and Ethan Coen have teamed up with longtime collaborators Roger Deakins (cinematographer) and Carter Burwell (composer) to craft another rich and expertly structured film.

John Wayne won his only Oscar portraying ‘Rooster Cogburn’ in the 1969 True Grit. This version tells the same story but makes a more earnest effort to capture the period and the contraction-free formal English dialogue of the Charles Portis novel. While Jeff Bridges surely must have been tempted to peek long and hard at the Duke’s award-winning performance, he veers off instead into an almost incoherent gruff bounty hunter, more in danger of being compared to Billy Bob Thornton’s ‘Carl’ from Sling Blade.

The film opens with a healthy chunk of narration lifted directly from the novel, setting up the story’s conflict. A lowly hired hand named ‘Tom Chaney’ (Josh Brolin) has gunned down the honorable man who hired him and now that man’s daughter has made it her mission to track down the fugitive and bring him to justice.

Finding the right actress to play the role of the hellbent young’n ‘Mattie Ross’ must have been the mandate that most challenged the directing-writing team. It’s a demanding role that requires not only way above average intelligence and maturity, but a fierce sense of purpose and compassionate righteousness. Unknown Hailee Steinfeld not only fits the bill, she is a revelation.

Before she can head out on the warpath, she must set her slain father’s estate in order by making burial arrangements and settling accounts. Not to be taken advantage of by the callous adults she encounters, we quickly see what ‘Mattie’ is made of, threatening legal action while negotiating with a local Colonel (Dakin Matthews) for horses paid and not yet delivered, causing the poor slob’s head to spin, all the while getting her price and bringing closure to loose ends. When she returns to the Colonel to arrange her posse and purchase back one of her father’s horses, he becomes flustered and asks meekly “Wait a minute, are we trading again?”

It’s a long scene and one that might have been cut or significantly shortened by another filmmaker. But the Coens understand and value character development more than most of their contemporaries, and consequently we set out on the manhunt with our young heroine knowing fully well what she is capable of; and, in an unforgiving landscape (all shot in Texas, reminded me a lot of Jeremiah Johnson, 1972) dominated by mean men with bad teeth who shoot first and ask questions second, this girl gets what she goes after – and we root for her every step of the way.

Once she commissions Bridges’ ‘Rooster Cogburn’ and his braggadocio tag along Texas Ranger ‘LaBoeuf’ (Matt Damon) and the three of them plunge into “Indian country” in search of ‘Tom Chaney’ – who has apparently latched on to the notorious ‘Ned Pepper Gang’ – the action and entertainment wallop of True Grit is relentlessly rewarding.

Fresh off of his Oscar-winning performance as country singer ‘Bad Blake’ in last year’s Crazy Heart, Bridges is definitely in the zone here, chewing up scenery left and right, rolling his own smokes and sucking down whiskey. But it is the combative banter between Damon’s proud but cartoonish Texas Ranger and the defiant ‘Mattie’ that give this picture so much energy and life. In their first encounter he warns the little whippersnapper that “A saucy line will not go very far with me.” But does she heed his warning? Hell no! This girl has a saucy and snappy retort to everything and the dynamic sustains their relationship to the end. Later, ‘LaBoeuf’ needles ‘Cogburn,’ asking him “Do you let little girls hooraw you?”

She “hooraws” them both over and over. The first night of their quest they sit around a campfire that ‘LaBoeuf’ marvels at, explaining to ‘Cogburn’ and the girl that his heroic and sacred Rangers would never dream of igniting such a majestic blaze. He then proceeds to brag that he “…has lapped up water from a hoof print and felt fortunate to have it.” All of this makes for some quality belly laughs as ‘Cogburn’ bristles and ‘Mattie’ rolls her eyes in disdain.

True Grit is also full of pleasant character surprises. Brolin’s much talked-about ‘Tom Chaney’ is finally just a hapless knucklehead who repeatedly mumbles things like “Nothing’s going my way” and “Everyone’s against me.” The real nemesis that awaits ‘Cogburn’ and his odd pair of wisenheimers is ‘Lucky Ned Pepper,’ played brilliantly by Barry Pepper, who hits just the right tone to go toe-to-toe with Bridges. No small feat, considering.

It’s a joy to sit in a dark theatre and get lost in a film that is so well-realized the foul stench of the characters actually fills your nostrils. The Coen Brothers consistently surround themselves with familiar faces who do what they do as well as anyone in the biz. Bridges delivered one of the most beloved Coen characters of all time, ‘The Dude’ in The Big Lebowski (1998). He comes through again here, without an ounce of parody or even homage to Wayne’s earlier work. But the real collaborative genius on display here is the wonderful imagery of Deakins’ camera work set against another beautiful Burwell score. Substance over style big time.

Once the shooting commences and the body count rises, there is a moment when ‘Mattie’ gives ‘Cogburn’ an affectionate grin and acknowledges “You display great poise.”

I think she was referring to the lot of ’em.