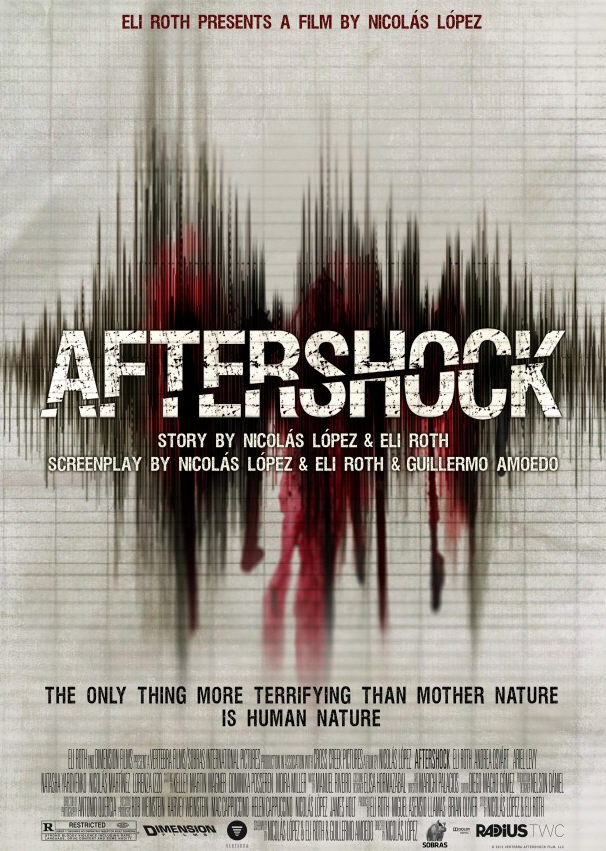 But he is an effective salesman. Movie Vine recently attended a press event promoting his new flick, Aftershock, which debuts this Friday, May 10th. Sitting at a roundtable interview with several online outlets, dressed sharply in a hunter green Oxford shirt, looking very much the leading man, he spoke enthusiastically about everything from his time spent shooting in Chile, his working bromance with director Nicolas Lopez, and among other things, what it’s like to live your dreams.

He’s such a good salesman, in fact, that his discussion of the film was for me, a more compelling narrative. The most interesting opinion he expressed had to do with how this film is part of a new wave of independently made movies. Solid HD cameras are widely available and filmmaking has never been more accessible. If you dream of directing, he advises you simply get out there and shoot something.

He points to himself as a prime example – he was eager to make extreme horror movies but no studio would fund the projects he was pitching. He ultimately made Cabin Fever and Hostel, which gave the horror genre a jolt as well as jumpstarted his own career. Now, for his current projects, Roth discards the studio system entirely, claiming you don’t actually need a lot of money or their advertising resources to make something entertaining and profitable. He and director Nicolas Lopez, whose previous credits include a slew of raunchy Chilean indie flicks, teamed up and independently shot this project on the fly amid the all too real ruins of still earthquake-torn city Valparaiso. A to B to Carnage.

Further to this, Roth boldly opted to release the movie not only in theaters on the 10th, but also on iTunes and On Demand with minimal marketing. He considers it capitalizing on how the general public is realistically consuming entertainment now, namely streaming it to various devices.

It’s an interesting thesis, one that Roth intends to prove with his next few projects – he noted he and Lopez will be continuing their partnership producing more movies in Chile in a similar fashion. Indeed, the two appear deeply in movie-making love, and spoke with great affection for each other. Lopez went so far as to call them, “very gay ” for one another, hilariously.

But all practical considerations aside, what of the movie, itself? Roth’s cult fan base will no doubt be anticipating this release and any horror enthusiasts will find much gore to enjoy here, though it has markedly less than Roth’s previous outings (which I consider an improvement even as some more hardcore than myself may disagree). It follows the Hostel model to a very graphic T – what starts as a lively travelogue devolves quickly into violent death for the characters.

That being said, some might argue it’s not a horror movie, and though there are perhaps more thriller elements to it, the movie ticks off the standard horror beats: Introduce hapless protagonists, introduce bodacious babes with requisite shots of butts and boobs, and, after a brief stint of carefree fun, our characters encounter the baddie, in this case Mother Earth in the form of a brutal earthquake and its aftermath. Cue the characters being systematically eliminated.

Roth co-wrote and produced the movie, but chose to take a much more featured turn in front of the camera, rather than behind it (in the interview Roth revealed it was Quentin Tarantino who encouraged him to act more prominently after his turn in Inglourious Basterds was so celebrated). Here, he plays the protagonist of sorts, simply called, Gringo. Gringo is on vacation, away from his high-powered job and role as single dad, visiting his friend Ariel and persuaded to club-hop by Ariel’s puckish friend, Pollo. Roth throws out the essential expository details of his life while hitting on girls at clubs, for a few comedic beats. His Gringo is sufficiently fish out of watery enough for Pollo, who can be best described as the Chilean Zach Galifianakis, to persistently roll his eyes at his inexperience with the culture. None of these more light-hearted moments matter though when the quake hits and it all goes to hell.

At least it feels like hell watching it. The earthquake and all of the action play very visceral in the film. Roth revealed in his interview that the effects were virtually fully practical and it absolutely reads. Plus, Roth and Lopez both referenced filming in the actual debris from the real earthquake that hit Chile in 2010 – evidently some of the scenes filmed amongst tombs in a graveyard had actual corpses popping out of their coffins and into frame, kind of like a post-mortem cameo. Those details, combined with the excellent sound design, result in a very physical film-viewing experience. When the quake occurs, and a large cement block of ceiling crushes some club-goers, it reverberates in your bones.

Throughout the course of the movie, there are moments just like that, featuring graphic violence that hits like a punch to the gut. The thing about Roth that might be a little genius is that he actually provides a 21st century Gothic model – in his movies, the dark things that human beings do to one another are far worse than anything related to the supernatural, or in the case of Aftershock, natural disaster. In the aftermath of the quake, in no special order, people are crushed by debris and left behind to die by those around them, impaled on various blunt objects and left to die by those around them, shot by those around them and then, yes, left to die, raped repeatedly by, you guessed it, those around them, and somehow perfectly appropriately, Roth saves the most gruesome death for himself. You’ll no doubt be unsurprised to hear that this terrible death occurs at the hands of malicious human beings. I would call it, especially when considering the last few sentences, unrelentingly brutal.

Honestly, the movie wasn’t for me. It was tough to watch and I had a hard time getting a bead on the tone throughout. I do think fans of Roth’s previous work will enjoy, and his character gets a lot of great comedic moments in before all the killing and raping starts. I think the real story here is how he made the movie, eschewing the studio system in favor of doing his own twisted projects his way. He’s also out in front of what could potentially be a game changer for the film industry with his decision to release Aftershock simultaneously in theaters, on iTunes and On Demand. It’s a risky move, but risky seems to be paying off for him so far. If nothing else, making bold choices like these have allowed him to live his dreams and direct and produce the movies he wants. How many can say that?

Oh, and to any Eli Roth fans reading this, go to Youtube and search for “Eli Roth Heart Attack,” and you will be rewarded for your efforts. Trust me.

Check out Aftershock for yourself in theaters on Friday, May 10th or purchase the film on iTunes and view it On Demand and online. Click the link to watch the film now: http://gowatchit.com/movies/aftershock-266135

Follow Eli Roth for the latest news on all of his upcoming projects, including the much anticipated feature, Green Inferno @eliroth.